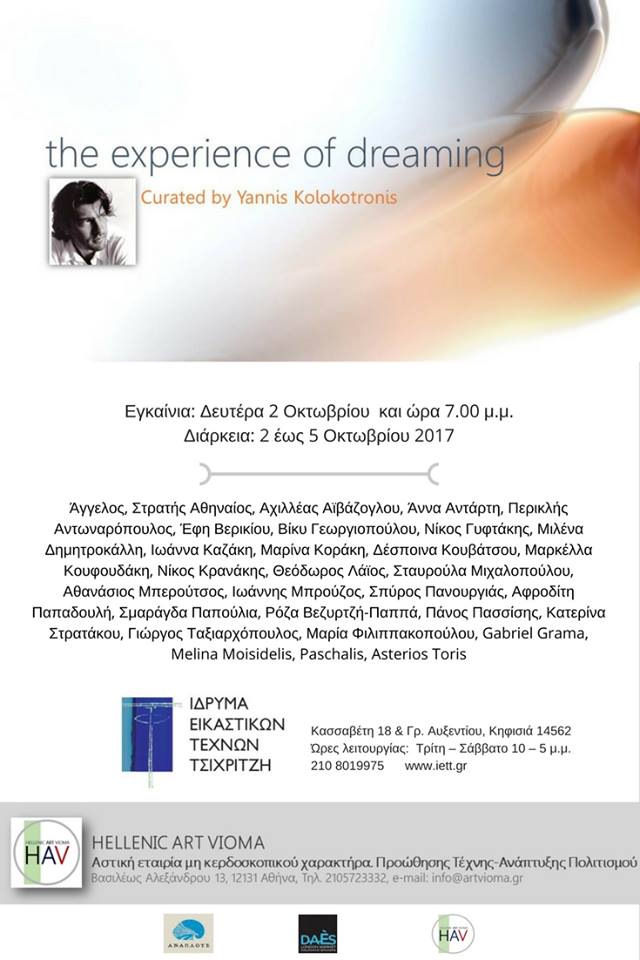 John Kolokotronis notes:
"The experience of dreaming - The Dream Experience, or Art, is Energy

In sleep, man comes into contact with the subconscious, another energy source of human creativity. In dreams all the contradictions of the material world are reconciled. God or demon in antiquity Sleeping with a white tunic of Death with the black tunic, Morpheus, Phibertorus, Phantasos and other thousand siblings or children, exacerbated the anxieties, fears and passions of human nature to feed the subconscious with new desires - thoughts. In the material world, people's dreams are potentially feasible, anchored in the logic of matter management, are filtered into the shadows of consciousness and appear as thoughts and desires. Conscious and subconscious stem from the same energy source.

But why do we need the symbols? Because they are more powerful than words? Words consist of symbols, letters are symbols, sentences are a series of ordered symbols. That is why the beginning of art is related to writing.

Thus, every work of art is a reaction to absolute materiality. It contains a piece of truth, which in turn also illustrates the knowledge of materiality. However, no work of art has replaced the already known truth with a new spiritual truth of universal acceptance. That is why every piece of art is partial truth inadequate but important as an expression and part of the most complete truth. The error of the most enlightened artists who touched spirituality and had the power to illustrate it was when they were troubled to represent the energy. There angels appeared to flinch, to mourn, to participate in material matters in humanity. Everyone shares the wicked mysteries not in the material plane but in energy, just as the power of prayer lies in the release of energy. The amount of energy absorbed by a prayer is tantamount to ecstasy in front of the greatest masterpiece of art. If it was created, we would know it!

Thus, art becomes one of the choices of man to sense, think, and live in another way, different but similar to what each chooses through his profession. If the great works of art contain the coveted balance in which one trend does not overturn or fight the other, because it is a variety of forms of expression of energy, today's great works of art, balanced between steel and know-how, fight back the memory of the past and try to predict the future that will be nothing but exploration of energy. "(1)

The title of the exhibition "The experience of dreaming" refers to the constant exploration of the energy. The works of the exhibition are its visual recording by the artist either in sleep (subconscious) or in consciousness (conscious). That is why we strive for their balance in a constant play between the synergy and the imaginative inventiveness, between logic and dream, the conscious and the subconscious.